Hide a column in a Wrap when a controlling cell is TRUE.

The HideColumnIf function hides a column in a Wrap when a controlling cell is TRUE. It works like when you hide rows with the Hide Rows/Sheets widget or the HideRowsIf function, but on columns instead of rows.

When a controlling cell returns TRUE, the HideColumnf function hides the column it is in. You activate the function by inserting it into any cell on the column you want to hide.

There is a similar funciton that hides unnecessary rows.

You wouldn’t ask a technician “how many problems were reported in the fifth carriage” if you knew the train only had three carriages. It is a common problem in Wraps and other web forms that some questions only need to be asked under certain conditions. Unless a question is relevant, it is often better to hide it from the user.

To create a Wrap that handles this situation automatically, you can begin by asking the respondent how many cars there are in the train. In the example below, their response will appear as a choice from the dropdown widget in cell B1, which is named car_count. 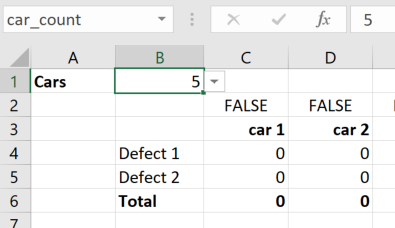 We will use column C and up to ask for information about defects in the corresponding carriage. We could create a separate controlling cell for each column but in this case, it is easier to use a condition directly in the HideColumnIf function call.

You may want to hide both the HideColumnIf function and its controlling cell from the user. You can do this with the Utility widget.

In this example, column G of the Wrap will be hidden if the car_count dropdown (in B1) is set to a value less than five.

This is what this HideColumnIf function call will look like:

The cell containing the HideColumnIf function can be hidden or in a hidden row.

The controlling cell can be hidden, in a hidden row, and/or on a hidden sheet.

In the example above, we could have inserted a controlling cell in D3 with the formula

However, this content would not fill down or copy/paste nicely, since you would have to manually change the number of cars for each column. To make it possible to use the same function for all the columns of the table, you could change it to

Since column D is the fourth column, this formula evaluates to the same condition as the one above, but it can now be copied unchanged to work also for all other columns in the spreadsheet. Perhaps a minor saving in this case with only five columns, but if your table includes many columns using a smarter formula can save time and reduce the risk of errors.

If the Wrap doesn’t already have a cell that you can use as the controlling cell, you can control the visibility of the column with a condition directly in the HideColumnIf function that either returns TRUE or FALSE like in the examples on this page.

The controlling cell is an input cell and must be named. The cell with the HideColumnIf widget does not have to be named, and naming it adds little value or readability.